What do you think?  Is the customer ALWAYS right?  Many pundits claim this as a basic tenet of business.  Trainers drill into high customer contact people (HCCPs), the ones that actually get to deal with customers, the idea that the customer is to be taken care of.  The ‘customer is always right’.  The intention is good, to provide excellent customer service and satisfy the customer.

The problem with this belief is the customer isn’t always right. Many customers think they are the expert.  Thanks to the Google, some patients now come to their doctor with their symptoms, the diagnosis, and the treatment.  They think they are the doctor.  This can be dangerous in the health care industry when the patient thinks they are the expert.  I have experienced a version of this with some clients.  They come to me and say, “Mary is a problem, you need to fix her, she needs some assertiveness training.”  They have made the diagnosis and supplied the remedy.  Often, the real problem is the manager, not Mary, and I have to push back and reframe the work to be done.

Secondly, you don’t want every customer.  Some customers are not the kind of customer you designed your business for. Therefore, they are not a ‘good’ customer.  The marketing saying is, “Not all meat is good meat.”  And this applies to customers.  It doesn’t mean the customer is ‘bad’.  Just that this particular customer is a bad fit you’re your business.  High maintenance customers demand Tiffany level service and want to pay Walmart prices.   These customers drain your resources and frustrate your employees.  They will never be satisfied.  Get rid of them!

Why is it important to know who you want to help?  To know who your ideal customer is.  There are all kinds of customers out there.  Good ones, bad ones, and just plain average ones.  The definition of these categories depends on you and what you are selling.  If you are selling cheap stuff, bargain basement deals, you will attract customers of like mind.  If you are selling an illusive dream, a lifestyle of the rich and famous, you will attract similar types.  Build your product around the kind of customer you want to serve.

On Tuesday February 4, 2020, I woke up and turned on the news, expecting to find the results of the Iowa caucuses. And, what do I get … nothing. The morning paper headline, “Iowa Caucus Chaos”. It’s a shock when our expectations are not met.

It’s an interesting thing to consider, expectations. We all have them. Some are high, some moderate, and some low.  Some may even have strong beliefs about expectations. “I work hard, and I expect you to do the same.” “I expect you to make me proud.” “I don’t have any expectations and I’m never disappointed.” One of my beliefs, “If you say you are going to do something, do it.”

Expectations are often not stated explicitly. We ‘expect’ that the other person already knows our expectations. And we are shocked when our expectations are broken. The employee who steals from the company coffers. The spouse who criticizes you in public in front of friends and strangers. Your child who lies to you. Your friend who betrays you.

At work we have performance appraisals. Expectations are the foundation for this process. That’s why the process is so challenging. Often, the expectations are not clear, not well defined. What is expected may not be spelled out. And, even if the goals are clear, how to do the job is often not clearly articulated. No one ever told the brash sales super star that being nice and courteous is important too.

Meeting expectations is one definition of quality. I ordered French toast and bacon last week. I got the French toast, and the bacon came five minutes later. Did I need to tell the server that I wanted both at the same time? When expectations are not met, we have a problem.

Why is it important to be aware of expectations? I have them. You have them. We all have them. The question is, are they the right expectations? Are they realistic? Half the marriages in America end in divorce. Expectations not met. Half the people at work are not engaged in their job, they are anxious or depressed, or a little of both. If you expect life to be easy, with no pain or sorrow, no difficulties or illness, a blissful existence until the day you die. LOL, and that’s not short for lots of love.

“Inscribed on the temple of Apollo at Delphi”, Greek saying

Long before the Google and Twitter feeds, the Greeks had inscriptions on their Temples giving their citizens sage advice.  I have long appreciated the two-part message of the Apollo Temple, to “know thyself” and “nothing in excess”. They seem like simple, admonishments, however, I think of them as good rules to follow. Know thyself. Many people get into trouble with other people because they do not understand themselves. They have huge blind spots. They consider themselves God’s gift to management, and they leave a trail of bodies behind them, oblivious to the impact they have on others. Just getting a recalcitrant to realize that they have a problem is 80% of the deal. Then they are ready and motivated to do something about it.

Nothing in excess. Gluttony can take many forms, and moderation is a good antidote to this sin. You can exercise too much, be too perfect, drink too much, or be overly controlled. Most good traits and virtues can be overdone. Stress is a good example. If you are bored, you are not getting enough variety, challenge, and stress in your life. If you are panicked, and dealing with chronic stress that is unrelenting, you are hurting yourself. Your body and mind will pay the price for this unresolved stress response.  You want to have just the right amount of stress to be in the “zone” humming along, spending your days comfortably engaged.

The stress level diagram below shows the relationship between performance and stress levels.

Why is it important to be self-aware and moderate in our habits? Being self-aware means you are more responsible and accountable. You don’t go around blaming others for your problems, and you don’t see yourself as a ‘victim’. Self-awareness is the key to other awareness and stronger connections with others. And moderation is a good virtue to follow. How many steaks do you need in a day? How much do you need to be happy?

“Learn from the past, live in the present, and create a compelling future.”  NLP saying

We all have a timeline.  Where we were born, grew up, went to school, and then work.  And we have a story about our life.  Think about your timeline and the significant events you had on it.  The problem lies in the fact that for many of us we get stuck or spend way too much time either thinking about the past or worrying about some event in the future.  And some unfortunates do both.

If you want to be sad, spend time dwelling on past events and grievances, bad things that happened to you.  If you enjoy a little anxiety, worry about future events, all the things that could go wrong and how it will affect you.  If you want to be healthy and happier, more resilient, develop this belief about time …” learn from the past, live in the present, and create a compelling future for yourself”.

And, as for the future, create a compelling one for yourself.  Much better than worrying about things that haven’t happened.  There is a reason why Zebra’s don’t have ulcers.  There is even a great book by that title, I recommend it.

So, it’s best to live in the present.  How do you do it?  A favorite remedy of mine, during the day, I do a number of one-minute meditations.  I take three normal breadths, then three deep breaths, and then three normal breaths.  Do that twice and in a minute, you can change your state.  I have lowered my blood pressure and increased blood oxygen level by doing this simple relaxation technique.  Focusing on your breathing is a good way to be present, aware. 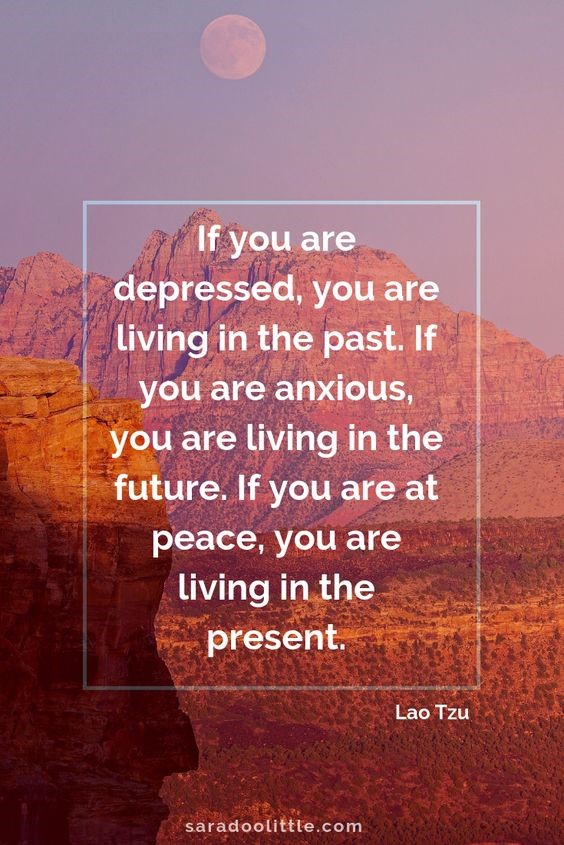 Living in the present is a healthy way to go through life.

Why is it important to go through life in the present?  There are many reasons why it’s healthy and better for you to live in the present.  When you think about it, that’s where we are, moment by moment.  Being aware of that, savoring each moment and not worrying about things that happened to you long ago or worrying about things that might happen in the future, you free your mind and body to experience each moment.  As Mary Oliver asks us in “The Summer Day”, ‘Doesn’t everything die at last, and too soon? Tell me, what is it you plan to do with your one wild and precious life?”’

A well-known psychologist, Philip Zimbardo, created the now infamous “prison experiment” in 1971 where Stanford students were randomly selected as ‘inmates’ and ‘guards’. They had to stop the experiment after a few days because the student guards were turning into real sadists, actually assaulting their fellow students and the student prisoners developed signs of extreme stress. A movie, book, and documentary have been produced on the Stanford prison Experiment.

But I want to talk about an earlier study Zimbardo did in 1969. He abandoned two cars, one in an upscale Palo Alto California neighborhood and the other car in a poor run-down section of New York City. Within minutes, the New York car was being vandalized, parts stripped, and windows smashed, the car was completely destroyed in hours. Whereas in Palo Alto, the car remained untouched for weeks. Then Zimbardo took a hammer to the California car, breaking a window. Within hours, the Palo Alto car was destroyed. Some criminologists got a hold of this study and applied it on a larger scale to communities. The idea being, once you let some decay or disorder fester and linger, it can spread and impact the whole neighborhood. This idea also applies to businesses.

A little story, a true one. I was driving by my gas station this morning and was thinking, “I’m going to have to find a new service station”. Then I thought about the broken window theory. In this case it started with the car wash system breaking down two years ago and never getting fixed. Then a couple of pumping stations stopped working and they put a cardboard sign over the pump handle saying “Broke”. Lately some of the pumps are not processing credit cards so there is a message that says, “Pay inside before pumping.” How do you like trying to figure out how much gas you are going to need before you start pumping? There are only a couple of working pumps left at this place.

This is not the best way to fix a broken window in your car.

Why is it important to be aware of the broken window theory? Poverty is the cause for a lot of broken windows, however, organizations sometimes, in an effort to maximize short term profit, make decisions that have long-term deleterious consequences. The gas station owner may be saving some money now, but he will be losing customers and his business in the long run. Do you have a broken window where you work? Get it fixed.