It was 1969. You knew you had made it in Pacific Telephone’s sales training class if you got to see Vince Lombardi’s classic film, the Second Effort. You can still see it thanks to the internet of things:

I never dreamed that I would leave San Francisco, become a Viking fan, and actually see the Vikes beat the Packers at US Bank Stadium some 50 years later! When I saw the movie, I had just returned from Vietnam, and this was my first ‘civilian’ job. Seeing the Lombardi “Second Effort” meant I was going to graduate.

The challenge for all of us is to find that level of persistence that works for you. You can choose to not enter the arena or quit at the first obstacle. If I quit after believing the advice many gave me, I’d be living in a van down by the river. On the other hand, craziness is just continuing to do the same thing over and over and expecting things to turn out differently. So, make the second or third effort, but remember it’s okay to pivot now and then too. 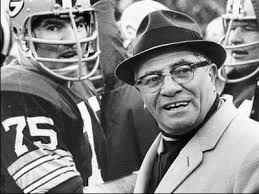 “Mental Toughness is Essential to Success”

And one other thing Lombardi taught me in that film — arrive at meetings 5 minutes early. Don’t come a half hour early disrupting other meetings, or don’t come late or right at the exact minute. Arrive 5 minutes early and get yourself seated and organized, ready to go when the meeting starts. I have fun with my clients when they violate this ‘Lombardi Time” rule. Not a bad movie, I learned two things that have stuck with me my whole career.

Why is it important to make a second effort? This idea is much broader than a “sales” technique, it’s really a state of mind. How persistent are you? How badly do you want what you are going after? Do you believe in what you are doing? Think of a goal you have been struggling with. Make a second effort at accomplishing it!