Skip to content
In the Judy Garland 1939 classic movie version the Wizard (Oz) was portrayed as a bumbling humbug. See picture below. But I would like to posit a more nuanced understanding of him. It started as a book, The Wonderful Wizard of Oz, written by L. Frank Baum in 1900. 1900. Science and medicine were just starting to get a little scientific and less superstitious. Doctors were starting to wash their hands; the germ theory of disease had recently been discovered. It was a time of traveling salesmen, astrology, leeches, phrenology and other occult practices. Franz Anton Mesmer was treating anxious young ladies with an early form of hypnosis, “mesmerizing” them. “Animal magnetism”. This was the historical context for Baum’s book on the Wizard of Oz. 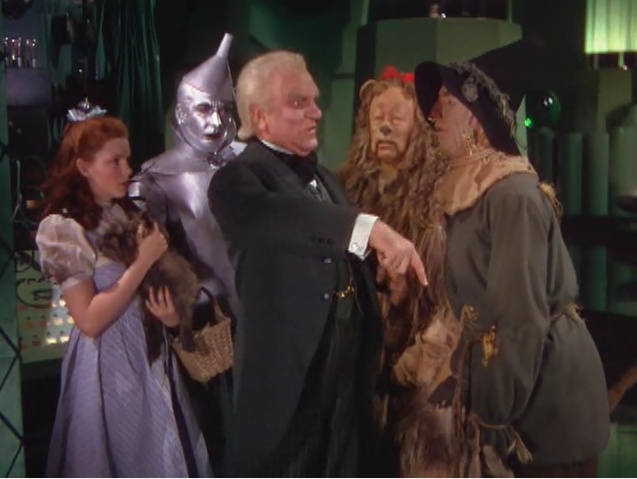 The Wizard with Dorothy, the Tin Woodman, the Cowardly Lion
and the Scarecrow.

What does the Wizard do? Oz, gives the Scarecrow a head full of bran, pins, and needles, ‘bran-new brains’. He gives the Tin Woodman a silk heart stuffed with sawdust and the cowardly Lion gets a potion of courage. Their faith in the Wizard’s power starts to work on the three of them. The Tin Man starts feeling, the Lion becomes brave, and the Scarecrow starts using his brains. They start to discover themselves, who they really are. Think psychoneuroimmunology today, the study of how the mind works on the immune system to affect our health and well-being. We now know that the mind and the body are part of one system. You are what you think. This was an advanced idea in 1900!

Oz was exposed as a fraud in the movie, but was he really? Maybe he just wanted to help people? What do you think?

Why is it important to have faith? Our values and beliefs define us. You don’t have to go to church to have faith. We’re not in Kansas anymore. The Emerald City of today has both opportunities and challenges. If we think of the Wizard as someone who basically wants to help, don’t we all have a little bit of him inside us? Do you believe?